Mount St Helens ash eruption, 2005, viewed from Portland, Oregon. As if to signal the 25th anniversary of the devastating 1980 eruption, Mount St. Helens released this symbolic outpouring of ash and steam at 17:30 on Tuesday evening, March 8, 2005. Volcanic ash rose to 36,000 feet and fell as far away as 125 miles east of the mountain. The eruption began with practically no warning, an hour after a magnitude 2.0 earthquake on the volcano's east side, and lasted 30 minutes. Mount St. Helens, a 8,364-foot (2550m) volcano, is located about 40 miles (60km) northeast of Vancouver, Washington, Portland's sister city across the Columbia River which divides the states of Oregon and Washington. The river in the photograph is the Willamette River, which divides Portland's east and west sides. The Columbia River is not visible in this image; it runs perpendicular to the Willamette. Mount St. Helens was named for British diplomat Alleyne Fitzherbert whose title was Baron St. Helens. The mountain was named by Commander George Vancouver and the officers of H.M.S. Discovery while exploring the northern Pacific coast from 1792 to 1794. Mount St. Helens erupted violently at 08:32 on Sunday, May 18, 1980. Nikon F4S, 70-300/4-5.6D. Fuji RVP100F.. 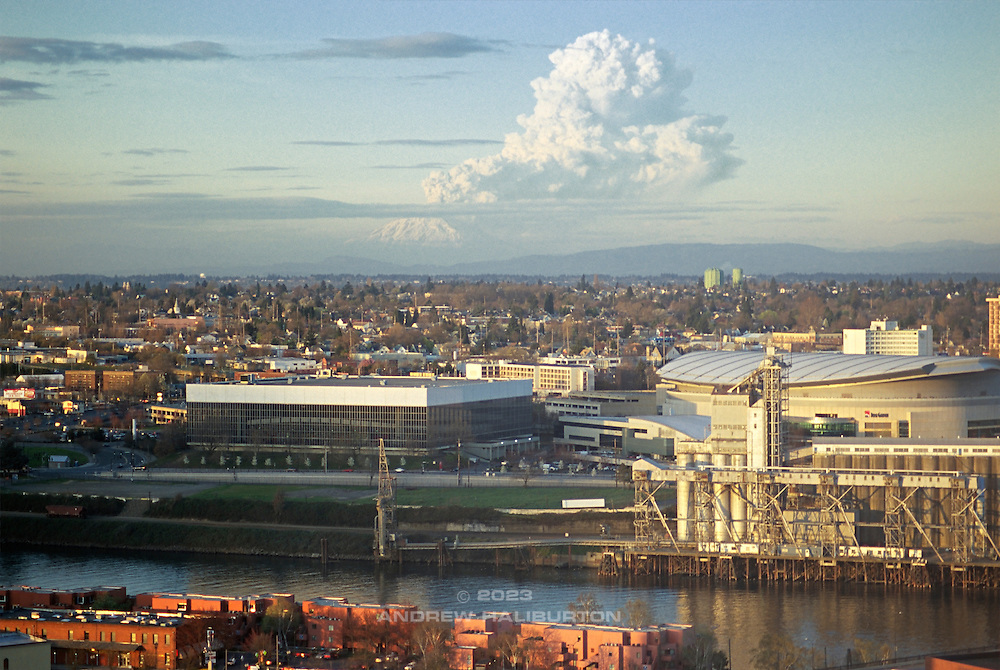